This list of the most important SKOS classes and properties used by PoolParty is relevant for advanced users or programmers who need to work with the RDF representation of a project. We also give a very short introduction to the Semantic Web technologies behind SKOS. For more comprehensive information on the Semantic Web, please go to W3C's Data Activity and pick a presentation which fits your interests.

SKOS is based on the Resource Description Framework (RDF) which is one of the fundamental Semantic Web specifications. It was developed within the W3C standards framework. RDF uses graphs as its data structure. This means that each concept is a node and edges connect these nodes to create a graph.

The image below displays data of a thesaurus presented as a graph. The graph has the concept 'PoolParty Thesaurus Server' as its central node. Several edges connect this node to its labels and definition as well as to other nodes. All edges are typed, thereby indicating which kind of relationships exist between the nodes they connect, e.g. the node 'PoolParty Thesaurus Server' is connected to the node 'Thesaurus editor' via skos:narrower. The edges are called 'properties' in RDF. They can also connect a node with a literal, in the case of SKOS these are the labels, definitions or scope notes. 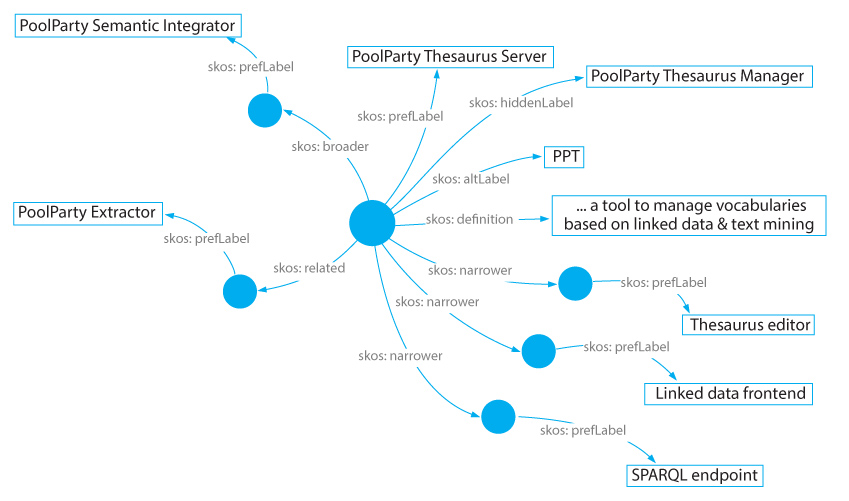 Each statement in RDF encodes information as so called 'triples'. A triple always has the form subject > predicate > object, e.g. 'PoolParty Thesaurus Server' > skos:narrower > 'Thesaurus editor'. Each property and class in SKOS and each concept in PoolParty has a uniform (unique) identifier, also called URI. In the case of SKOS these are always HTTP URIs, in the case of PoolParty they can either be URNs or HTTP URIs. The complete URIs of SKOS properties or classes can be formed by expanding the namespace prefix 'skos:' which is just a shortcut for the base URI http://www.w3.org/2004/02/skos/core#. The complete URI for e.g. skos:narrower is http://www.w3.org/2004/02/skos/core#narrower.

The following table shows elements from the SKOS definition used by PoolParty:

A PoolParty project has no counterpart in SKOS. It is a PoolParty specific container, used to group concepts schemes, in PoolParty concept schemes are equated with thesauri.